Some players use different devices in a single day. Maybe an iPhone during the day, and an iPad when they get home. Or maybe you have an Android phone and an iPad.

Empires of Sand allows you to play the same game using multiple devices. In order to do this, you have to connect the devices to the same account. You need to use one of the three social networks supported: Facebook (iOS / Android), Game Center (iOS) and Google Games (Android).

Install the game in one of your devices and create your account.

Connect your account to one of the social networks available in the game. Let’s call this, your original account. This option is in the settings window. 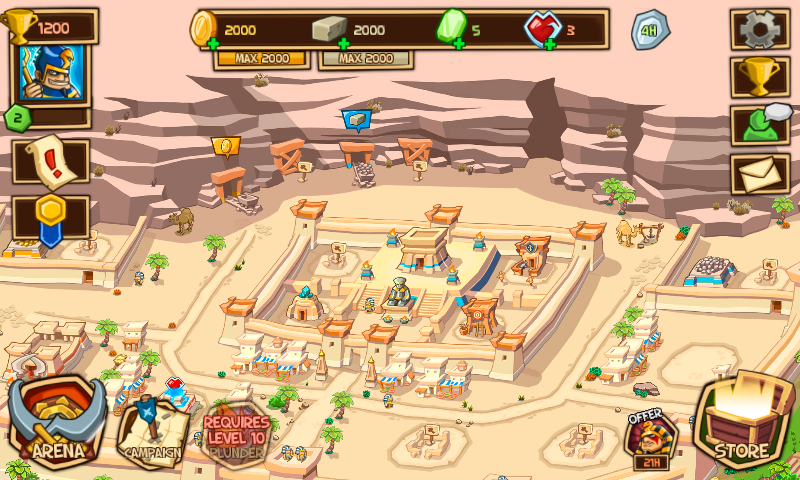 Main screen. The settings button is in the upper right corner

Of course, you can connect the game to more than one network.

In the new device, install the game and create a new user. It doesn’t matter the name you use for your pharaoh, because this account will be temporal.

Once you finnish the tutorial, go to settings, and connect the game to the same network you connected the original device.

The game will warn you because it will detect that your Facebook/Game Center/Google Games account is already in use by other pharaoh. At this moment, the game will give you the opportunity to download the information from the original account.

Since this moment, you can play with Empires of Sand from the new device.

You can connect more devices and keep the same game between more than two phones or tablets.

Despite of the game can be played from several devices it cannot be played at the same time from different devices. For example, if you play from an iPhone and a minute after you start the game from an iPad, only the things that happens in the iPad will be saved.

5 Responses to "Play Empires of Sand in Multiple Devices"